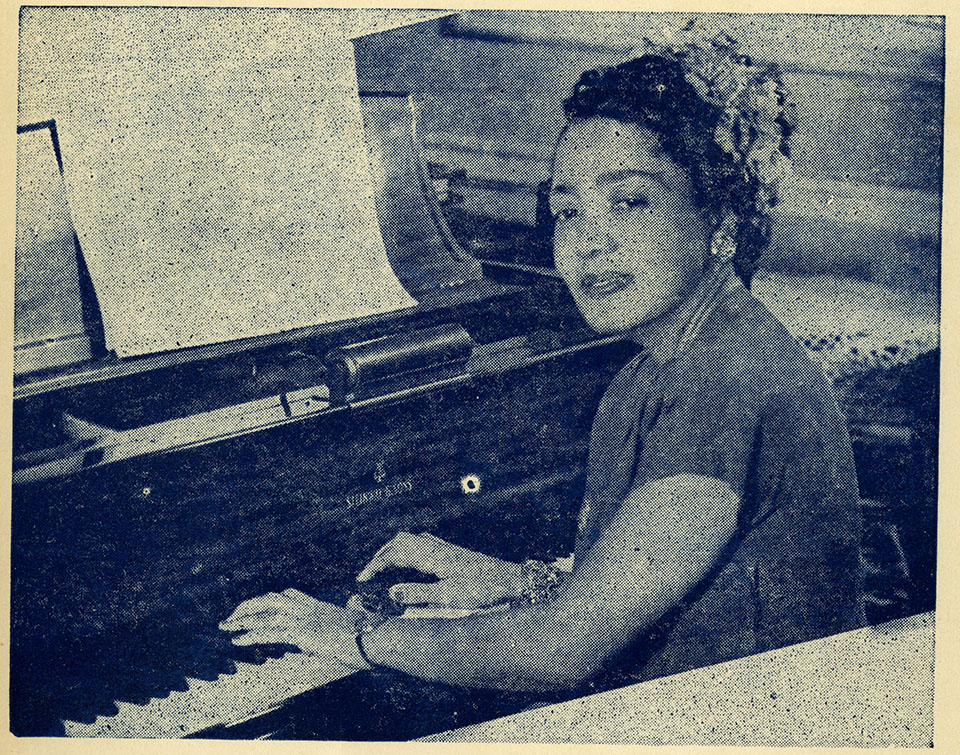 Ursula Guy Curd (1890–1988) was an African American pianist admitted to the first class at the Curtis Institute of Music in 1924 and graduating in 1926. Her musical ability was described as “unforgettable” with “clear tone and marvelous touch” by the 1942 Pittsburgh Courier—but to limit her memory to that of just an excellent pianist would sell her accomplishments short. She was a founding member of the Omega Omega chapter of Alpha Kappa Alpha, a sorority dedicated to the advancement of education and culture of African American women. From the early 1900s to today, Alpha Kappa Alpha has been at the forefront of social action for African Americans, from creating the first congressional lobby to advocate for better working and living conditions to establishing the American Council of Human Rightsi. In addition to her performance career and her social contributions, she was a teacher in the Philadelphia Public School System, a prolific piano teacher to students in Philadelphia, wife to Dr. Kirksey Curd, and mother to Ursula A. Curd (more affectionately known as “little Ursie”).

Ursula came from a musical family; growing up, her father was a minister and regularly sang for the congregation while her mother was an above average pianist. She began her musical studies at Washburn College in Topeka, Kansas, and while her main career was teaching in the Philadelphia Public School System, she continued to study music at the Philadelphia Musical Academy and eventually the Curtis Institute of Music. One of her teachers at Curtis, Clara Dunn, had nothing but praise for Ursula: “I found in her a most excellent pupil, playing with good musical understanding, fluent technique, and a fine sense of rhythm, all of which indicated a good musical endowment.”

Her main teacher at the Curtis Institute, George F Boyle, had similar commendations: “When Ursula Curd came to study with me at the Curtis Institute of Music, she disclosed decided talent pianistically, coupled with high musical and artistic ideals. She has since then, consistently matured and developed so that she is now an interesting and accomplished pianist.” She seemed close with her teacher as shown by this letter sent by George Boyle after one of her concerts. 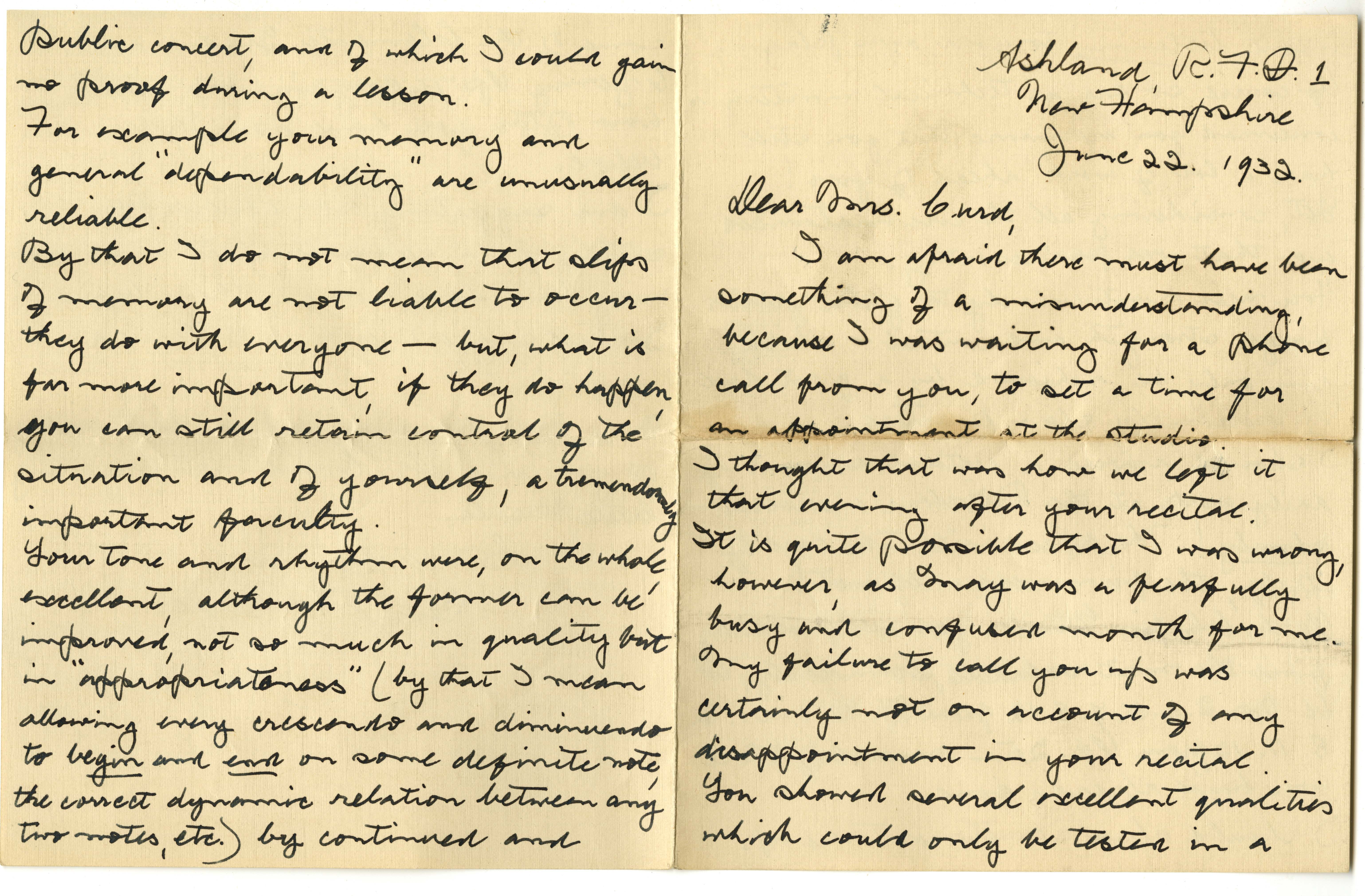 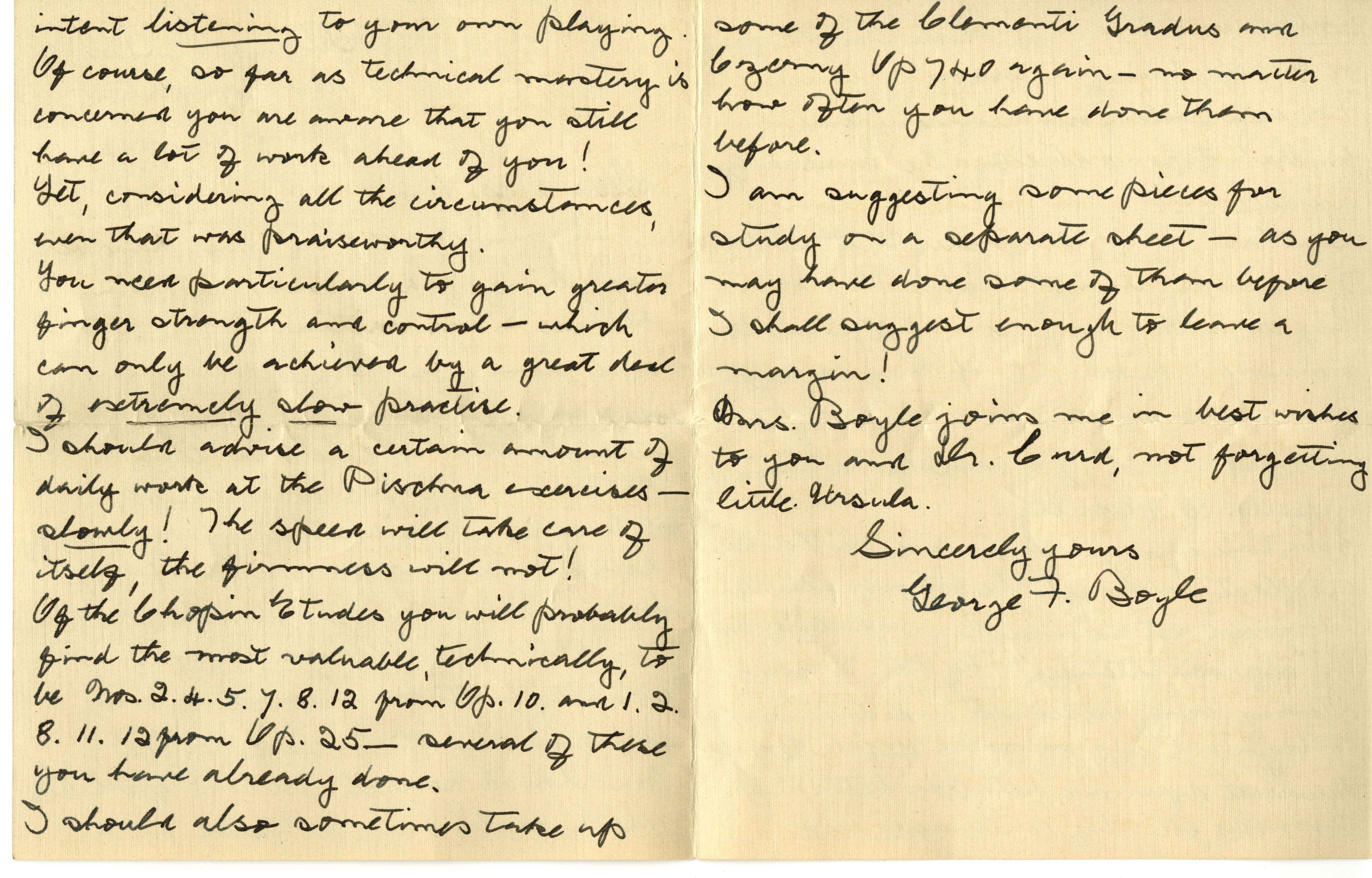 She enjoyed a successful career as a concert pianist performing solo works, concerti, and chamber music for large audiences across the northeastern United States. Some of the more unusual groups she performed with were the Philadelphia Piano Ensemble and Philadelphia Piano Quartet. Sponsored by Ursula’s sorority, Alpha Kappa Alpha, the Philadelphia Piano Ensemble gave regular concerts of a wide range of works like Lizst’s Hungarian Rhapsody No. 2 for four pianos, Rimsky Korsakov’s Dance of the Buffoons for 16 pianists, and even Malaguena by Lecuona for 14 pianists. 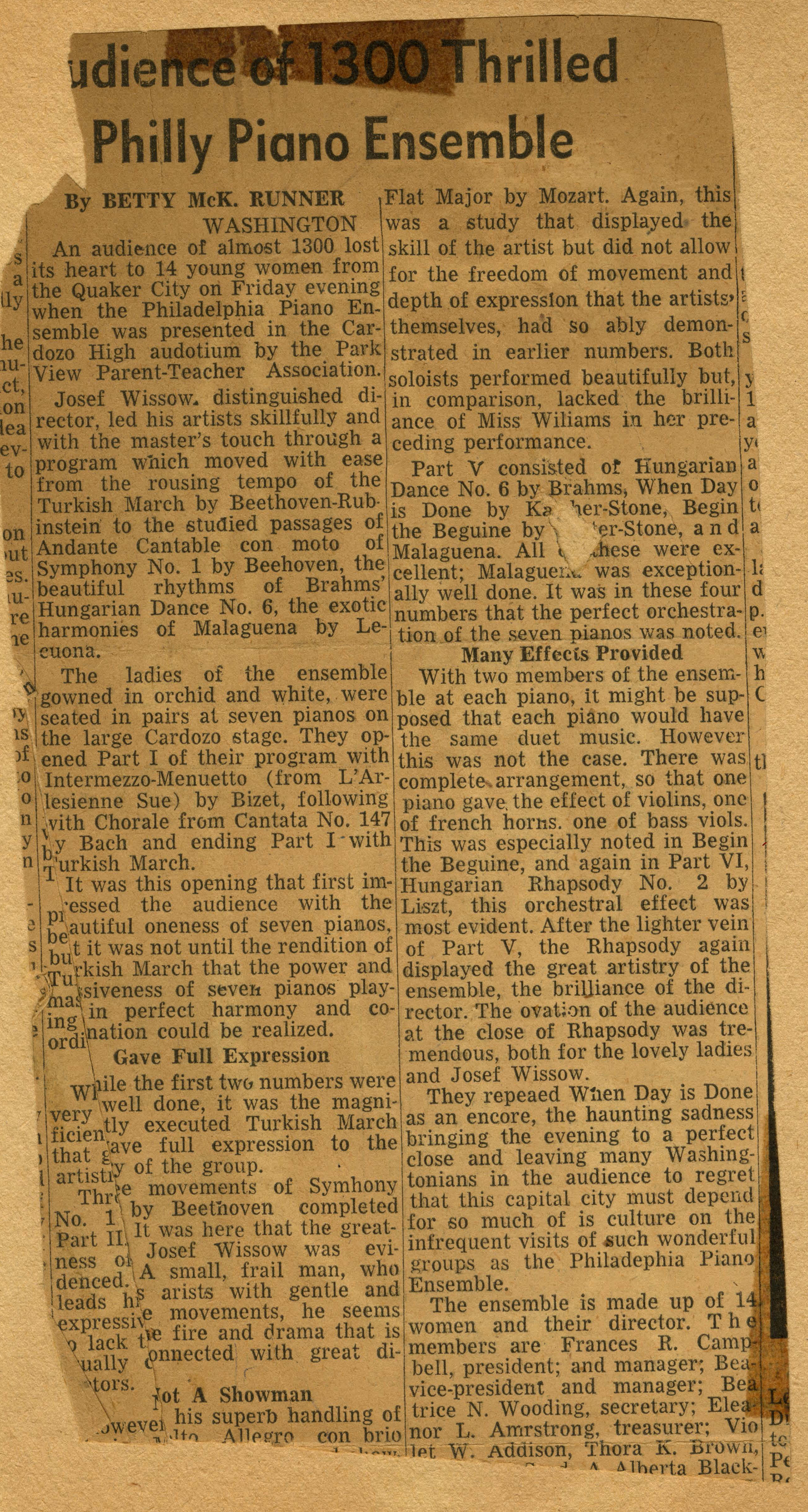 Her ambition was not limited to her own musical performances but included her desire to facilitate concerts for the enjoyment of the public. As shown by the letter below, on behalf of Alpha Kappa Alpha, she took on the huge task of organizing a concert by Paul Robeson (African American bass-baritone, stage and film actor) at the Philadelphia Metropolitan Opera House without sufficient financial backing. She pulled it off with great success, perhaps most succinctly described by the letter: “But, that’s Ursula!!!”. 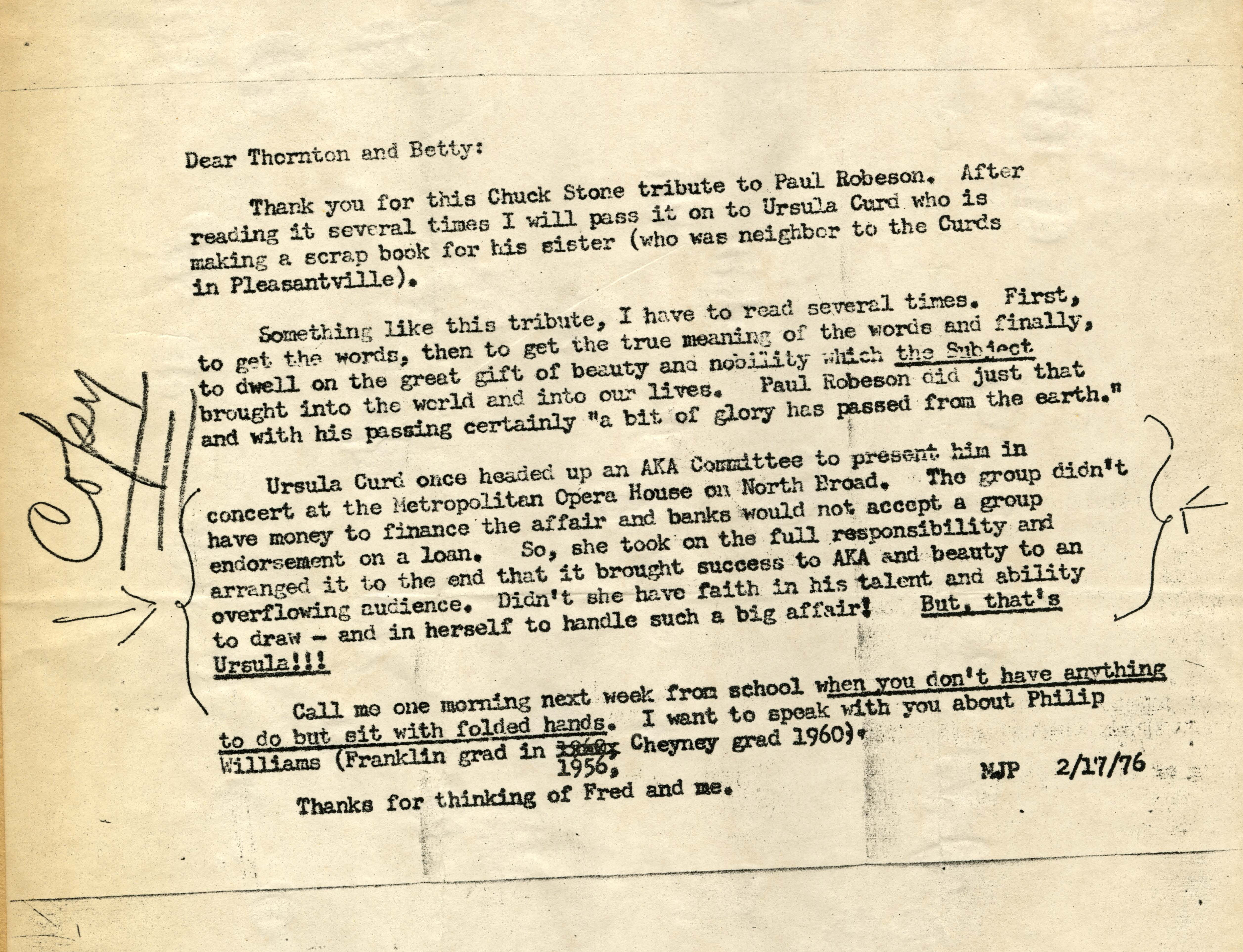 In a scrapbook filled with newspaper clippings, concert programs, and personal notes, her inclusion of a particular quote stands out. On a clipping of “Words to Live By” by Dorothy van Doren is a quote by St. Thomas of Assisi: “I would finish hoeing my garden” —in reference to when St. Thomas was asked what he would do if he were to suddenly die at sunset that day. Considering Ursula Guy Curd’s substantial accomplishments, this quote epitomizes her dedication to her life’s work and unwavering knowledge that she was bettering the community at large. 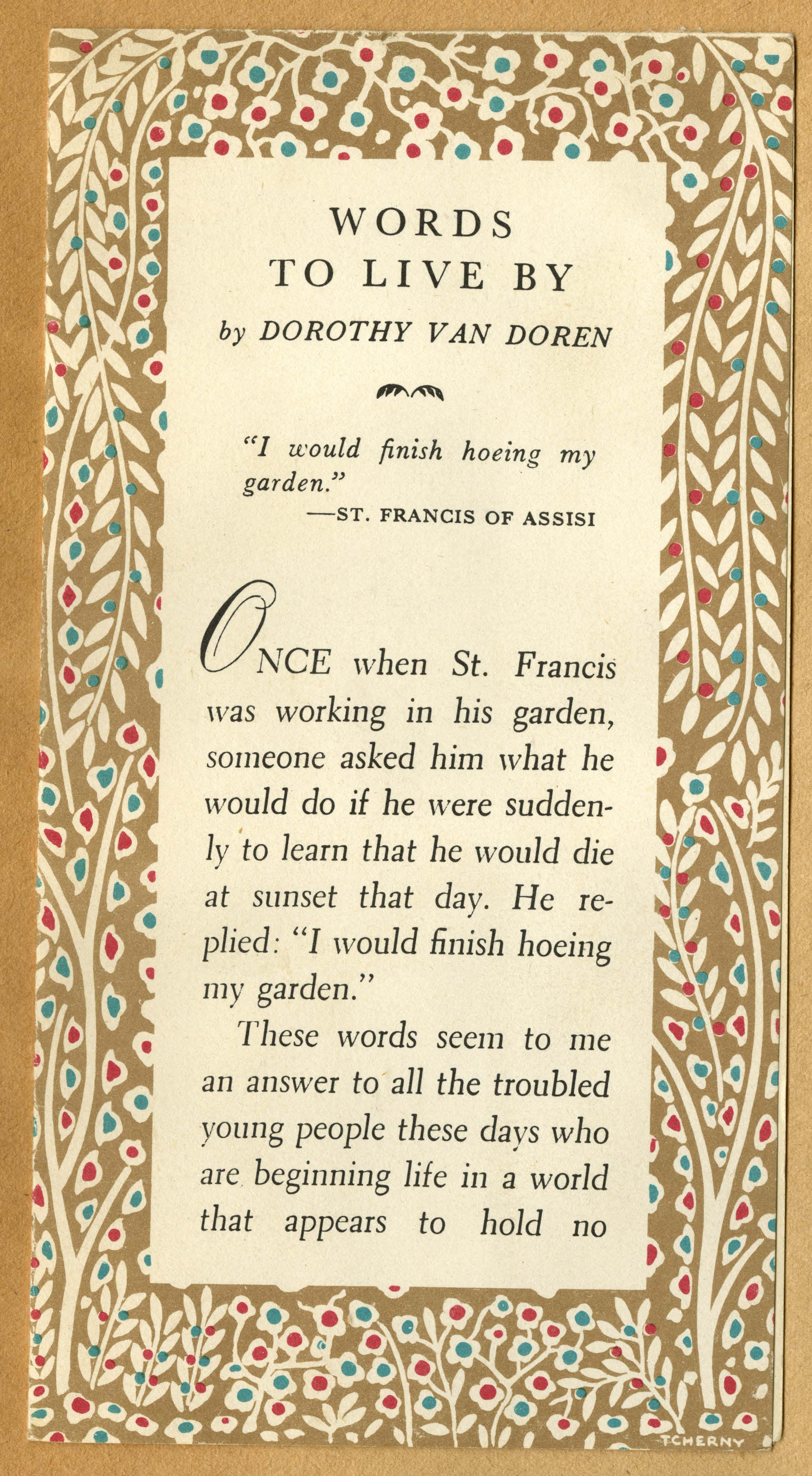 Harpist Claire Thai, from Tucson, Ariz., is a student of Elizabeth Hainen and entered Curtis in 2018. In her free time, she enjoys working with computers and playing with her three Shih Tzus.